‘It is a pleasure to milk here’

The dairy farm of the Ribberink family has undergone a metamorphosis in the last two years. A doubling of the herd of cows over the past six years, a new barn and a beautiful new milking parlour adorn the farm in Denekamp. ‘Up to now we have had no trouble finding milkers,’ says Sjoerd Ribberink. ‘But then again, we have a very labour-friendly milking parlour.’

Ergonomics: an important criterion
From the yard, you walk straight into the milking parlour of the Ribberink family in Denekamp. No steps, or stairs, you stand directly in the pit at eye level with the udders. ‘We can also adjust the height of the hydraulic floor for shorter or longer milkers’, says Sjoerd Ribberink about their one-year-old, 2x16 Rapid Exit SAC milking parlour. Ergonomics was an important criterion for choosing this parlour. ‘A balance arm, light clusters, an ascending waiting area with a crowd gate and a radio with music ensures ease of work’, Sjoerd lists the advantages of the beautiful milking parlour with inflow of light. ‘We also have a bucket with a separate milking cluster, so you don't have to re-connect and you can clean it when it's more convenient.’

Build for robots
Over a year ago, the Ribberink family's farm went through an enormous development. The old barn, which was heavily overcrowded with cows and had a 2x8 milking parlour where milking took place seven hours per day, required a decision regarding the future for the farm. ‘With a new barn, the herd grew with more milking cows. Initially, we wanted to go for a second-hand parlour and add robots later’, says Sjoerd, pointing to a space at the front of the barn that could have space an extra added section containing four milking robots. ‘The idea of robots was mainly inspired by our expectation that it would be difficult to find qualified milkers in the future.’ However, after some more intensive considerations, they decided in fever for traditional milking. ‘We also want our cows on pasture during the summer time, which is a challenge with robotic milking and a large herd’, says Sjoerd as one of the decisive reasons. ‘Besides, we like structure in our business, also because we do most of the work with the fields ourselves. In the milking parlour, you have seen all the cows before you start-up your the tractor.’ As a third reason, the young entrepreneur, who runs the business together with his family, says that they like working with employees. ‘We have choosen for this farm size to be able to manage with more people. That gives more flexibility and freedom to do other things during the day.’ ‘Around 4.30 in the morning, Sjoerd - who usually does the morning milking himself – start-up. He finishes around a quarter past seven, just before the contract (automativ, dele contract?) feeder gives the ration to the cows. ‘Around 8 o'clock in the morning, we have fed and milked all the animals on the farm.’

Capacity of 130 cows per hour
The challenge of what type of milking parlour it should be was decided fairly quickly, according to Sjoerd, who has worked in many different parlours around in the world. ‘The pleasure to milk was at the top of our wish list,’ says Sjoerd, who explains that there are up to seven different milkers at the farm. ‘And they all enjoy coming here to milk with great pleasure. ’The choice of a 2x16 means that one person can do the milking alone and milk 130 cows per our’. ‘ If you really want to finish-up the milking more quick, then milking with two people is an option, which makes 170 cows through the milking parlour more feasible.’ The side-by-side milking parlour gives a good overview of all the cows. ‘With an external milking  rotary, the cow disappears from your sight at some point. We wanted to do a follow-up check and dip the tits of the cows with udder care. Furthermore, the movement from milking place to milking place in the side-by-side parlour is more varied because you are also walking.  We think that this prevents physical injuries caused by doing many of the same movements. ’Initially, there was little discussion about the brand of milking parlour: ‘We have always milked with SAC, they have a competitive price and we have a great service here in the neighbourhood. So there was no need to look any further.’

The finishing touch with Unitrack
With the growth of the herd, the dairy farmer is now doing the finishing touch. Unitrack sensors are used to monitor the herd's health, rumination and heat. ‘The calving interval was decreasing when the barn was built, but it has since increased,’ says Sjoerd, telling that the tank milk cell count is around 120,000 cells/ml. ‘The aim is to bring the cells/ml down to 100,000, which was the level before.’ The production of the milk is now around 10,000 kilos of milk, with 4.39% fat and 3.75% protein. ‘The basis rather good, maybe we can increase production’, Sjoerd, who emphasizes that the mentioned combination between fat and protein is important for the farm. Additional  to that, twice-daily milking we can make money efficiently’ and with the investment we made, we have to`’, Sjoerd says, laughing. ‘We have the size of the herd, we want, but if we want to grow more we need to acquire more land. The milking parlour can easily cope-up milking more cows.’ 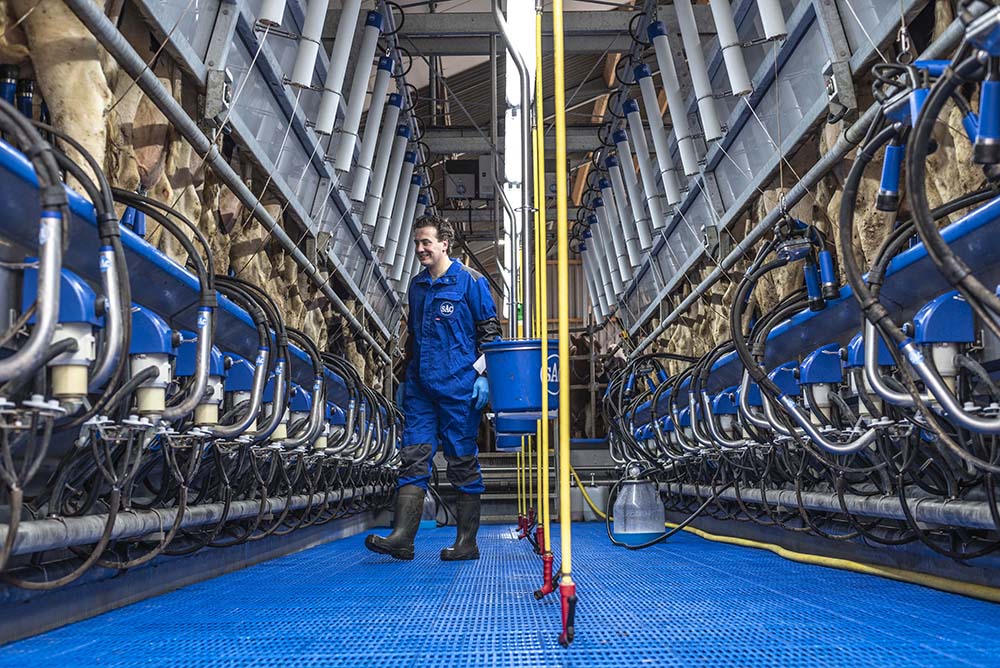 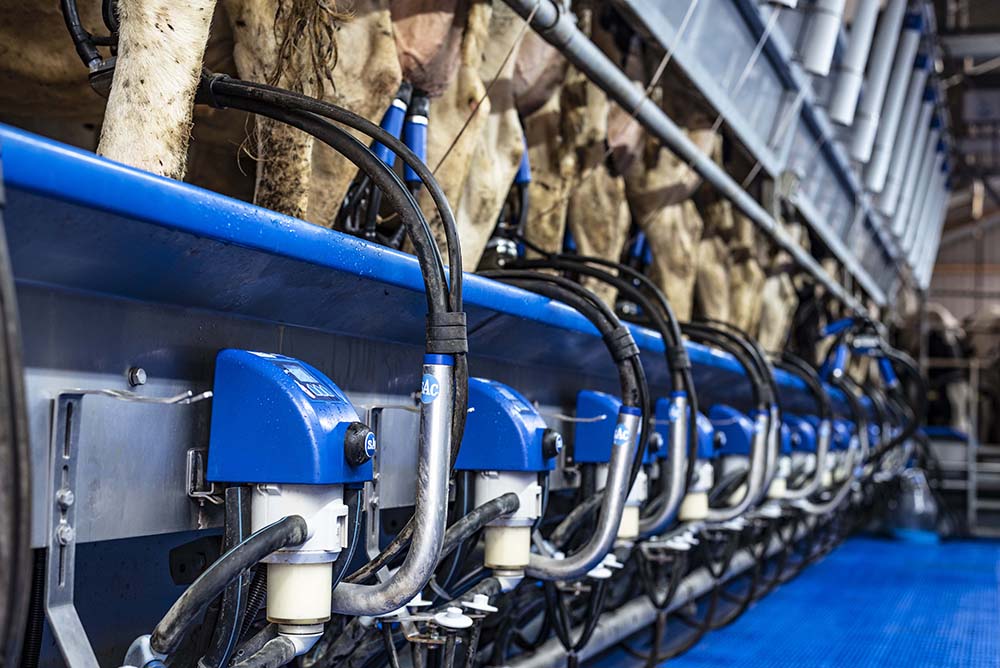 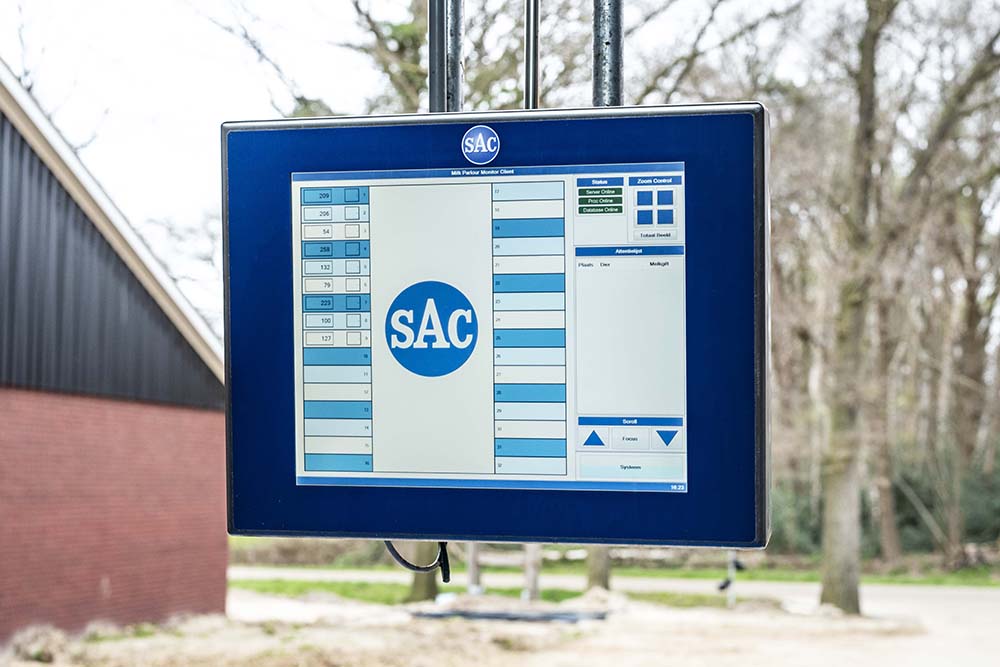